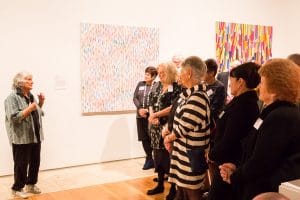 Exhibition preview guest speaker and artist Janet Dawson sharing intimate recollections from a career that has spanned over six decades.

Preview of the exhibition for NAGF Members and Friends.

On the evening of 19 May 2017, Foundation members and their friends attended a preview of the fabulous ‘Abstraction’ exhibition. This exhibition from the National Gallery of Australia highlights the work of thirty eight Australian women artists and focuses on their considerable contribution to Abstract Art

Although the works in the exhibition range from the early decades of the 1900s to the present, it seemed appropriate to set the scene for the evening with a nostalgic tilt at the sixties when abstract expressionism appeared to dominate the art world. Platters of canapés that could have graced the lavish openings at the galleries of Sydney and Melbourne 50 years ago were served. Who could resist the angels on horseback, the multi coloured pickles or those beautiful asparagus wraps? This was nostalgia food at its best!

As the evening progressed, Chair of the Foundation Judy Hart welcomed the special guests and introduced Janet Dawson, one of the exhibiting artists, to address the gathering. This was very special as we were treated to some intimate recollections from a career that has spanned over six decades. Janet Dawson, winner of The Archibald Prize 1973 and one of only three women to exhibit in the famous ‘Field’ exhibition, 1968, spoke of her own practice and the development of her art, referencing her five works in the current exhibition. It was also interesting to hear that she regarded her work not so much as abstraction but non-objective. She also noted with much affection, the earlier works of Ann Dangar, Grace Crowley and Dorrit Black whose pioneering experiments into areas of abstraction set the scene for the future.

Later we were introduced to the NSW Minister for the Arts, The Hon. Don Harwin, who was making his inaugural visit to the gallery. He gave us a brief personal profile, outlining his recently acquired responsibilities and responded appreciatively to his welcome.

Finally, after the formalities, the Foundation members and their guests were able to spend some time browsing this impressive exhibition and enjoy its range, detail and subtleties at their leisure. 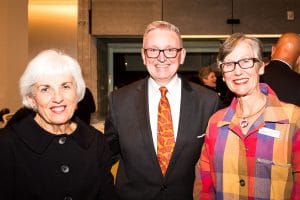 Society President Prue Viggers, The NSW Minister for the Arts, The Hon. Don Harwin and Foundation Chair Judy Hart at the exhibition opening.