The recent exhibition celebrating Roland Pope’s gift of his collection of books and paintings, 70 years ago, to the city of Newcastle has showcased the diverse interests and his careful taste. As we discover more about the founding benefactor of our Gallery, Dr Pope emerges as a modest and unassuming man whose significance in Australian history reaches far beyond the confines of this city.

The son of a successful Sydney business man, Pope qualified and practiced as an ophthalmologist in that specialty’s pioneering days. He played first class cricket, including Test appearances  for Australia and Scotland, and accompanied the touring Australian team on numerous occasions in the 1920s and 1930s as medical advisor, and unofficially as a mentor to young cricketers and conciliator in team rivalries. Don Bradman referred to him as ” this highly cultured and delightful gentleman”.

Pope’s collection of books reflects his interest in art, music, ballet, ornithology, cricket, golf, cooking and much else besides. Like many collectors, he bought paintings to support and encourage talented artists as well to acquire works representative of the varied tastes and styles of the times. His gift to Newcastle was typical of his generous spirit and a vote of confidence in the city’s cultural and creative capacity. 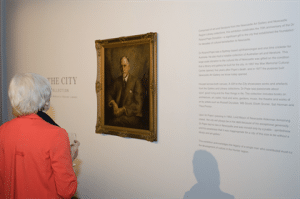 The Foundation’s own tribute to Roland Pope’s gift recognised his dual passion for sport and art at Newcastle Golf Club on Friday, 23 October. Dr Pope was a keen golfer and with his brother provided the land for Manly Golf Club. More than 40 Foundation members and their guests played a nine-hole competition and were joined for dinner by 20 or so supporters who had enjoyed a private tour of the exhibition. Fitting winners were Ann and Rosss Hutchison of Manly Golf Club with local golfers Roland Hicks and Geoff Watt. They were presented with the Roland Pope Cup by great-grand-nephew Rodney Pope.